Please scroll down to listen to MP3 files of some of our music.

The photo below was taken at a St George's Day ceilidh in Corfe Mullen - just after it was taken our former member Clive (far right) played a dramatic final chord and promptly went straight through the stage - rock 'n' roll eh! 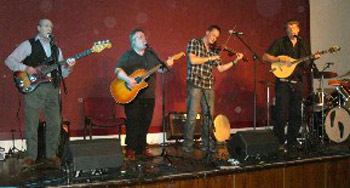 Cottage Industry are a 3-piece ceilidh & barn dance band from Dorset specialising in song and dance from England, Ireland & Scotland plus medieval banquets, shanty sessions and Dorset, St. Patrick's & Burns' evenings. Cottage Industry were established in 1976, since when the band has been on one long rollercoaster of a tour! Gigs across the country have included festivals, theatres, castles, country mansions, hotels, boats, clubs and pubs - and leaky barns! It also seems like almost every village hall in Dorset & Hampshire has echoed to the sound of the band's driving jigs & reels! Highlights of the past 30 years have included a 'medieval banquet' broadcast live from the BBC studios in Southampton and playing aboard a schooner owner by an exiled Cuban goldminer - with a crew of 10 Swedish girls!

Over the years the band has done quite a lot of recording - starting in about 1978 in a 4 track garage studio owned by photographer Roger Holman, to BBC Maida Vale Studios in 1981 & 1982 which produced an EP record release "We're All for Swanage", which is a song about Swanage Railway that made us famous on TV and radio - well, for about half-an-hour anyway! In recent years Cottage Industry have recorded in Peter Aston's 16 track analogue studio and continue to gig all over the place!